To go....till my lil pea-pie is ONE!!!! I can't believe it....well I can....this year has sped by with lightning fastness and I have been enjoying every.single.moment. every.single.day....all of them. The early birthday party went off with out a hitch, we enjoyed a lovely week with the man and are now settling down for the long haul....the days, weeks and months till September arrives and the man returns to the ones he loves that love him.

The drive home after dropping him off at the airport was a bit teary.....Ren asked for Da a lot and I talked through teary eyes that Da had to go bye-bye and he loves us and would be home before we know it. So, I am adjusting, shifting...in my head mostly (does that even make sense?)....Always the nagging in the back that something could happen to the man....that the kisses I gave him at the airport as he shouldered an impossibly heavy bag...could be the last....and I know to shush the nagging to pay it no mind....my man will be fine...he will return home strong and full of missing us. So, I push it away and I don't think about it... 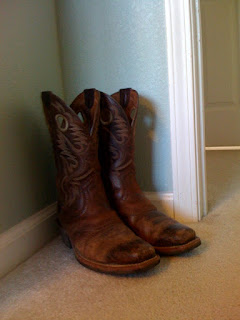 but I do leave his favorite boots at the doorway to our room....sure to see them when we enter and leave...a silent reminder of love and prayers....of missing the one we love.
Posted by Nili at 7:48 PM 2 comments:

Sooooo.....last Friday..my last post...I was all excited and pumped to blog again...to get my thoughts out and just take some time....and then...then I hit a slump...a wall...an I.would.rather.not.be.around.me.either. couple of days.....and well as you saw...or rather didn't see...I did not write. I am still feeling a little funky but thought that I would just get some stuff out of my head.

~My hard working man is coming for a 6 day visit! I am very excited to see him and spend some time together before he leaves for 6 months. I am hoping for a day to the mountains for a hike, a day at the zoo and maybe a trip to the beach...who knows though. We are going to celebrate Ren's birthday a bit early with a party while he is here...so..I have been pretty busy and some-what consumed with nailing down the final plans and figuring all the party stuff out. I decided to go with a pretty generic theme...just primary colors and balloons. I will post some pics of the decorations that I am creating and then of course some of the actual day itself.

~We thought we knew where we were moving to...but the plans have been canceled as far as we know and now where we live after September is all in the air again....not.much.fun to not know. But in military life nothing is official until it is official and then still it might not be official....so I hope we find out something sooner than later.

~My parents leave India today....and are headed for Europe until the end of March. I am glad they were safe while there and can't wait to give them hugs when they get here!

~I have not started training for the run...but as soon as this weather is not so cold/windy/rainy I am getting out there for sure. I did do some yoga stretches today..like two or three and one sun salutation...ha....I so need to start practicing again...I know it will be good for me for sure.

~I am working on a quilt for a friend...her first little one is due in June...It's a girl! Fingers crossed I can get this done in time for her shower the 1st of May.

~I took notice the other day when my niece told me I was on the computer a lot...and I knew that I was...it just took her saying something for me to see just how much. So I have made it a point to not play around/waste time on the computer during the day at all...If Ren is awake...then my laptop is closed. Which has turned out to be a really good thing. Not facebo0king quite so much...thank goodness that place is addictive and can be depressing sometimes too....I like it to keep in touch with family and cousins and long lost friends...but I don't need to post what I am doing....that I ate dinner...what I ate...who I saw...or didn't see...life was just fine before I ever signed on...it will be just fine if I check it once a week or so too. Funny facebo0king was taking up so much of my time...that and reading random blogs....my goodness what did we ever do before the world wide web...and I know...I know that is such a dated term...what is it called now?...Oh I know what we did...we spent time with each other....and we read books and had face to face conversations...don't get me rong though...I heart the www.

~Last but not least...here is a picture of my sweet boy..who is now 11 months and 1 day old...my.goodness.this.year.has.flown! 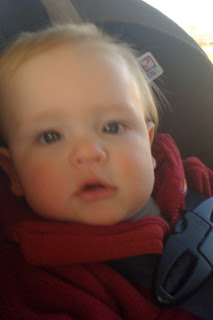 Welcome to my little space

Nili
I am a forty-something follower of Christ, stay at home Mama to three little wonders and a proud wife to my Air Force man. My days are full of taking care of my little family and our home, homeschooling, cooking food full of love, learning to be more like Jesus in my everyday and trying to keep my hands cupped around this life that we have graciously been given.